BioSyntonie is a hands-off vibrational healing system (super-subtle shockwave therapy, if you will) that includes a wide variety of treatments specific to entire body "systems" and "organs" based on complex East and West philosophies, physics, and optimal vibrational frequencies.
Note: The changes we are experiencing, including pandemic and atmospheric conditions, have altered how BioSyntonie feels during treatment. This shift is as dramatic as the pandemic: It is now very rare instead of common for people to "feel" it. However, after extensive testing, it does still have a positive immune-boosting effect. Therefore, BioSyntonie is now part of the general consult for every appointment, and clients sit during it instead of lying on the table. 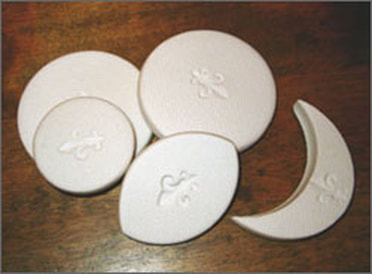 A small sample of the disks used during a BioSyntonie treatment.
Years of experimenting with this system has proven to Paula that it is the best way to begin almost every bodywork session:

BioSyntonie is amazing for nearly everyone, but especially helpful to the highly stressed, caregivers, ill, autistic, sensitive, those with anxiety or inflammatory conditions, and those affected by ADD/ADHD, or likely any neurological condition. It isn't a cure-all, but it does reduce symptoms in most chronic cases. Eg. In the only Parkinson's case Paula witnessed, tremors were dramatically reduced.

Works Even When Not Felt

For those who are more a-sensitive, during receipt of the treatment it may be less notably pleasurable or even not noticeable at all due to its subtle (subatomic) nature, but there will still be beneficial effects if one does not resist the treatment. Paula will guide or assist you as needed to get the most benefit.

Most report in the days and weeks afterward that they have the same stressors in their lives, but respond differently and more healthily. One client declared it had done nothing for him except give him a nice nap, and yet his years of leg pain and limping was just suddenly gone, as if by magic! No magic here, just effective, extremely subtle, mechanotransduction therapy. ​​

Vibrations either hinder or help. Vibrations in the correct frequency ranges promote healing through the well-known, scientific process called mechanotransduction.

Mechanotransduction is the process whereby a physical stimulus triggers biochemical and biological changes. Correctly and professionally applied dense or subtle physical forces (ie. touch, pressure, glide, stretch, shear, and vibration) can stimulate biochemical and biological changes that are well known to affect both mood and wellness. It cannot be stated enough that the quality of vibration or stimulus determines whether health-promoting changes happen or not - and the quality, just like truth, is found in the nuances. The more subtle the vibrations, the deeper they travel, like a submarine ping through the waters - of the fascia.

In short, BioSyntonie is a subtle, finely-tuned vibration therapy that triggers mechanotransduction and is, therefore, more correctly defined as "mechanotherapy."