​As a clinician, Paula cares the most about helping people retake charge of their own health and wellness. She does this by openly sharing what she is picking up from the body as she works it. The body is always communicating and it never lies, so when we learn to listen to it, our lives and our sense of wellness improve, often dramatically. This builds trust in self and the ability to help one's self, while reducing dependence on others. Plus, you cannot repair what you can’t see is broken, so she also has a reputation for seeing what many miss. Eg., as a computer programmer she had a reputation for finding and fixing old system bugs that no one else could! Ironically, she's just as adept at finding "bugs" in the human body, thanks to her devotion to developing accurate palpation skills - an earned skill she is also willing to share with others.​

The goal of Paula's Body Shop is to help people return to a higher level of health that leaves them far more resistant to stress, injury, disease, and the ever-increasing chronic illnesses that plague our modern world. Louis Pasteur realized, shortly before his death, that “The microbe is nothing; the terrain is everything.” Your body's fasciae system is your terrain and your best defense against pathogens. Fix up your body today for better tomorrows.

Paula retired early from a successful career as a computer programmer/analyst in the education, military, and financial industries. Always independent and outspoken, Paula was not satisfied with increasing job limitations via specialization (it's a joy killer), so she left behind 20 years of computer passion to create a new, independent life devoted to helping others, even though she didn't yet know in what way. With her health history, it was a scary, daring thing to forgo both her salary and health insurance without a safety net, and yet it was the path that led her to innovative health and healing through natural and self-empowering means.

​Paula has a remarkably sensitive, caring, and inquisitive nature grounded in the search for truth through accuracy. Like many, she was encouraged to ignore her body's needs and “toughen up” to serve only the needs of others, eventually becoming habituated to nervous gregariousness, which plays a role in health. Consequently, instead of giving her sensitive system the care, education, and understanding it needed to thrive, Paula's body succumbed to the inevitable: chronic pain and sensory overload.

Three events woke her up to the benefits of alternative (natural) therapies and nutrition models:
Despite the propaganda that alternative practitioners of all kinds were quacks, Paula could not dismiss the fact that allopathic medicine disempowered her and thereby kept her chronically ill, while so-called quacks were actually making a difference. This impressed her to her core and left her thirsty for a better understanding of human health so that she could help others avoid the unnecessary pain and sickness that marked too much of her life.

Two years of soul searching after her corporate retirement and four months working by the side of a gifted veterinary surgeon while on hiatus in Mexico, Paula discovered she had a natural gift (so to speak) for touch-based healing and at the urging of a friend, entered massage school - and was from there introduced to a plethora of other forms of healing, from Eastern philosophies to vibrational medicine.

Paula entered carefully into these other forms of healing. Open minded, yet critical, she discovered how to quickly separate what matters from what is superfluous, keeping what worked, and dismissing what did not. The ancient and storied explanations behind various methods did not sit well with her, yet the methods worked and that was worth investigating from a logical and scientific point of view. She is, therefore, open to collaboration with Western and Eastern physicians and scholars who can also look beyond ancient stories and focus on the reality of the effectiveness of given techniques.

Regardless of where she might dabble career-wise, she is devoted to going above and beyond for her clients with her joy coming from her work and being able to help make a positive difference in the lives of others, often using her own body as a laboratory.

There are great and cost-saving benefits to manual therapies, vibrational healing systems, and food-as-medicine-or-poison. Paula hopes that one-day natural medicine modalities and Eastern philosophies will be a welcome addition to mainstream science and medicine, and the gold standard for preventive care.

"I strongly suspect - and suggest - that the GP doctors of the future will be hands-on bodywork palpation experts." ~ PMae. 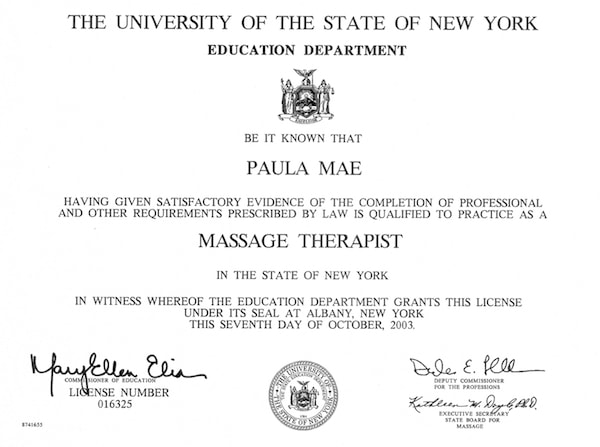 Click image to check licensing status of your NY massage therapist.
​Volunteer Appointments / Independent Study Professional History
A Note About Paula's Education
Despite great desire to receive a formal education, it just wasn't possible. Thankfully, her love of learning more than made up for any lack in formalities. With many thanks to some great educators early in life, a few astute bosses later in life, and being lucky to work with and learn from top professionals from a wide variety of careers, she gained at least the equivalent of a bachelor's degree, something very common to autodidacts. Eventually, Paula learned to appreciate the intrinsic rewards that come from gaining mastery in subjects of interest, in lieu of seeking certificates, diplomas, or awards. Your understanding is appreciated.
Education